Exclusive mode; what is it? do I need it? and how do I get it?

Odds are at some point you have come across the phrase “exclusive mode”, or possibly it’s older more inaccurate relative “hidden mode”. So; should you worry about it?

Exclusive mode is basically the manner in which InputMapper is able to open or connect to the device you are physically using. Generally most device in Windows operate in shared mode, meaning any application with the necessary permissions can open and communicate with any device as needed. In contrast, exclusive mode means that once InputMapper opens a device, no other program can use it. In some cases this is preferred as it prevents games from seeing and accepting inputs from both the physical controller and the virtual one created by InputMapper.

If your games works, then no, regardless of warnings or log messages. Generally speaking 96% of games wont care about weather or not it sees multiple controllers, as it only tries to listen to the one set as default (more about setting the default controller in Windows here). But games such as couch co-ops that by nature expect multiple controllers and other games like FIFA 19 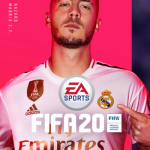 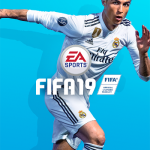 that have a habit listening to everything all at once, may need this functionality to properly play.

Over the years, various methods and scripts have been written to work around this issue, some more hackish than others. But lately the process has been more stable thanks to a filter driver known as HIDGuardian. HIDGuardian is a “filter” driver, and it sits between every input device on your computer and the OS, API’s and applications that attempt to access them. The driver then filters traffic based on configured rules regarding what applications are allowed to access what devices. This allows InputMapper exclusive access to physical devices and then in turn spits out a virtual device after mappings and conversions, making your game none the wiser that another controller even exists.

HIDGuardian can be installed from within the InputMapper 1.7 installer if you click the custom installation and choose it 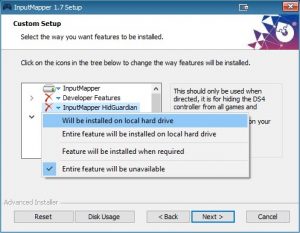 If you are using an older version of InputMapper, there is still a way to get HidGuardian to work using our standalone white-listing service found at https://inputmapper.com/downloads/download/5-tools/76-inputmapper-hidguardian but since this fix was released after 1.6, the more advanced checks to test the service is running properly dont exist in the InputMapper software and debugging and making sure it is running properly is completely up to the user.

Been working on the Inputmapper/DS4Windows/DS4Tool project off and on for about 5 years now. Also have a normal person day job as a freelance IT consultant and c# developer.

This site uses Akismet to reduce spam. Learn how your comment data is processed.