InputMapper 1.7 takes the original goals of DSDCS’s DS4Windows and earlier versions of InputMapper and expands on them.

Originally meant for mapping between a DualShock 4 and a virtual Xbox 360 controller to add support for the controller to games that only allow for XInput, IM now supports numerous input devices and mapping to numerous output devices.

Coupled with advanced macro and customization options, IM gives users the ability to not only change the device type, but how inputs are transformed and applied. 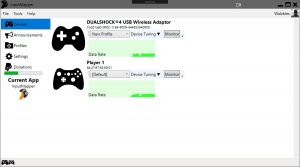 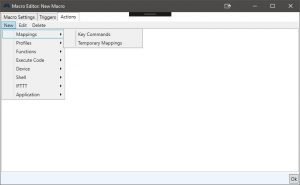 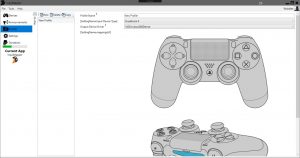 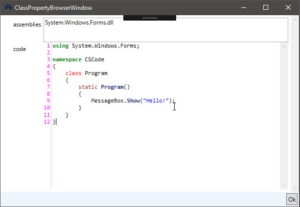 Heya guys, figured I’d jump on and give you all an update to the situation. As most of you are aware, Inputmapper suffered major server issues last week. The issues arrive from a physical drive in the SQL server going corrupt. Unfortunately it appears that In Motion Hosting, our provider, either does not have drive parity, or suffered such a massage failure that numerous drives failed simultaneously. In conjunction it also appears that the backps that they used to perform automatically as part of our service stopped and became a separate service that we have to pay for at some point meaning the old site had no backups….

Luckily this site had my own backups running off site so it was able to be restored.

The old file system is still intact as the outage only affected the SQL server so I will over the next couple weeks be migrating the downloads for the legacy version over to this site. I will also be working on placeholder pages to fix the issues of the old site trying to reach out to feeds that are broken due to the site outrage.

Hey guys, I figured you all deserved an update since the last time I poked my head in. Things are starting to return to normal, however there is still a lot of family stuff going on as you may expect as well as helping both my brother and sister who are both going through moves right now. On top of all that I have been bidding on contracts to take up the majority of my time for my “day job”. All of this has left about zero time for me to relax let alone get down to business on this project. I am still TRYING to keep current on support tickets, but it’s not easy as 99% of the time I am only looking at them from my phone and usually they are too in depth to handle when not in front of a computer.

So TL;DR, Thanks for the support and patience, and dont give up, I’ll be back as soon as my life allows it.

An update and a request

Some of you may be aware that earlier this year my mother went through some very serious health issues involving several brain aneurysms and a severe stroke in January.

Despite the severity of the stroke my mother survived and had been showing improvement all year in regards to getting her strength back to the point where she was starting to walk short distances with a walker.

However for reasons we are not completely sure of yet, she was found unresponsive and without a pulse on the morning of the 14th of Dec. She was taken to the hospital where they were able to restart her heart after another 3 arrests. After deliberation it was decided that in keeping with her living will that we let her rest. My mother passed away Dec 15 at 4:30am.

My family is still in complete shock and I ask for your best wishes but also that you allow us our privacy throughout this.

I also hate to ask this because a part of me feels it is an abuse of my platform, but another part of me really doesn’t care right now, but my family could use help in dealing with her final expenses as the nearly year long battle with her condition has left us all a bit tapped for such a sudden expense. I rarely mix personal issues and this project, but In this case I am hoping you wont mind.
I have set up a Fundly at https://fundly.com/kathleen-s-final-expenses Ive never done one of these so hopefully I set it up correctly.

I will let you guys know when I return to the project, but for now I need to be with my family.

Because of things going on, I forgot to publish this. It has some info and updates but keep in mind the timeline is off while things are on pause as I spend time with my family.

Family emergency dictates things are on pause, I will update more when I can. For now, those familiar with the app please help others on the forums and discord as much as you can.

A pretty serious memory leak bug has been discovered in IM 1.7. More accurately it’s a buffer overflow issue where some mid- range or heavily taxed systems are generating output device reports faster than the output driver can process them. This in itself isn’t an issue as devices do this all the time and is why DPC, interrupts and buffers exist. But the issue is that the output buffer isnt being corrected when it starts to back up which over time can become noticeable in the form of lag and audio glitches or other hardware device stuttering. This is a top priority right now as I modify the plugin to handle clearing a buffer when it starts to overflow.

The plugin system is getting some tweaks in the way that InputMapper manages the plugin instances themselves. Currently they are uncontained and pretty much after initialization IM has no real control or interaction with them whatsoever. I am going to start to tweak this and have the plugins exist within wrappers so they can have better access to settings and be more easily managed as-well as enabled or disabled as needed.

The Dualshock 4 plugin has been renamed to the Playstation 4 controller plugin and has settings to add 3rd party PS4 controllers to the detection list.

Documentation is going to get a bump soon as I focus on including documentation into the application itself as well as creating tutorials for common issues and setups.

Updates to the installer and the website have been among this weeks top accomplishments. Many bugs have been removed from the installer to make it more streamlined especially with upgrading. The site has a new downloads section that is still in progress that will keep a running change-log as well as ability to download older versions.

InputMapper now has the ability to notify users of newer versions, so make sure to update to that so you dont miss any important changes.

First connected devices will now get a popup wizard to walk through the basics of getting the profile created and a output driver selected.

Check In: Nov 8 2019 (Keyboard and mouse as output AND INPUT device coming soon)

Sorry it has taken so long to put out another in depth update. As you may have gathered, things have been a little crazy over here. Now that things have calmed down, I’d like to fill you in on a couple very cool new features coming to IM.

The first one isn’t new to IM in general, and in fact is a pretty core feature that unfortunately has been missing for a while as other pieces of the application had to fall into place and be finalized first, but emulated keyboard and mouse output is back and is running smoother than ever.

The next one is something that people keep showing up and begging me for and is often confused with the above. It has been for a long time just out of my reach due to some limitations with my understanding of input device API’s, but at long last I have cracked the keyboard and mouse as a INPUT device egg! That is right, very soon you will be able to use your physical mouse and keyboard to play PlayStation Now and Xbox Remote Play games. This comes with the caveat that many fundamental differences go into how a game responds to input between different devices like a controller vs a mouse, so dont expect to click a button and get the same experience as a true kb/m game, but with some tinkering using the numerous mapping connectors you may be able to come close.

On top of application changes, a lot has been going on with the site as well. You may have noticed the server shitting its pants last week;

Apparently something broke during the upgrade and everything is past the point of no return. The hosting company “escalated the issue to a higher tier”, so I’m sure their top janitor is on the case….

We did finally get things sorted and are now running smoothly and on a up-to-date CentOS install again. There are also some front end changes coming to the site, mostly focused on the downloads section. I am in the middle of writing a downloads plugin that will allow version histories so if a important feature breaks users can roll back to a previous version. Also part of this will be automatic updates coming to 1.7 just like 1.6 had.

It’s been teased for a couple weeks, but I think it is ready for release now, the new UI is now available for testing.

More things have been updated such as adding the option to switch between the advanced mapping view and the mapping UI (on properly configured devices). I have also swapped the data rate graph out for a less CPU intensive one. many other various performance changes have been made as well as some bug fixes for the Dualshock 4.